The Rogue Flyfisher's Newsletter for July, 2019
is now available.

Find it at:  rogueflyfishers.org
Posted by cranefly at 7:53 PM No comments:

EAST LAKE OUTING
Now that we’ve gotten past the uncertainty of Cinder Hill Campground’s availability, we can get to the fun part!
Your Outing Hosts will be arriving at Cinder Hill Campground on Monday, July 15th. We will be stationed in Sites #18 & # 21. All are welcome anytime during the week.
On Saturday July 20th, Breakfast Burritos, Coffee and Juice will be served (at no cost) by your Hosts at Site #21 from 7:00 a.m. to 8:00 a.m. Please RSVP to Steve Day by Thursday, July 11th if you plan on having a burrito. Steve can be reached at icrsrd303@gmail.com or at (661) 742-5835. Please leave a message if I don’t pick up.
The Official Joint Club BBQ will be on Saturday, July 20th. The BBQs will fire up at 5:00 p.m. Bring whatever slab of meat you would like cooked up and a side dish or dessert. Plates, eating tools and napkins will be provided. Bring your own beverages. Those within walking distance should walk. Some Parking will be available at the boat ramp near Site # 21.
Now for the fishing! For those folks not familiar with the lake and the fishery, I would strongly recommend looking at the East Lake Resort website and click on all the fishing links.  The website provides some very valuable information on the fish, the aquatic insects of the lake, methods and the seasons. Ralph Cutter’s article on Callibeatis Mayflies is very informative.
Suitable gear would include floating line set ups for indicator and dry fly fishing and intermediate lines for stripping.
Fly patterns should include Chironomids, Pheasant Tail Nymphs, Hare’s Ear Nymphs or similar patterns in sizes 14 – 20. Balanced Leeches in black and browns, sizes 12 – 16. Stripping flies should include Wooley Buggers or small Leech patterns in black, brown and olive in sizes 10 – 14. Dry flies, Adams, Cripples, Sparkle Duns in sizes 14 – 16.
For more information on fishing strategies, techniques and flies for East Lake, check out the following websites:
Flyfishersplace.com
Johnkreft.com
West-fly-fishing.com
Flyandfield.com

Posted by cranefly at 1:21 PM No comments:

Reservations for camping at East Lake

For those of you planning on camping at East Lake for the club outing on July 19-21, the site for making reservations is now open.
Steve Day announced that most people will be camping at the Cinder Hill campground and the main activities will take place there.

To make camping reservations, go to:  Recreation.gov
Posted by cranefly at 1:08 PM No comments:

Pembina and the Federal Energy Regulatory Commission (FERC) are playing games to discourage turnout at hearings this month on the Jordan Cove liquefied natural gas (LNG) pipeline and export terminal. We can’t let that happen.

Will you come to one of the following hearings?

FERC will be taking individual testimony to court reporters (rather than a normal hearing format) any time between 1pm and 8pm. If you can, come either at 12pm for a press conference, or 5:30pm for a rally with music, art, and speakers!

Since FERC rejected a permit application for Jordan Cove in 2016, the Commission has been stacked with new White House appointees who have made a career of representing the interests of big energy companies, and Pembina has asked them to approve its “new” application.

Thousands of southern Oregonians from across the political spectrum have turned out to peacefully show united opposition to Jordan Cove LNG at past federal and state hearings because the project threatens our landowner rights, water quality, existing jobs and small businesses, climate, and tribal territories.

FERC and Pembina obviously don’t want to hear or see that opposition. So the agency says that each individual who wants to speak against the project will be taken, one at a time, in front of a court reporter who will record their comments. FERC and Pembina may be hoping that southern Oregonians will be discouraged by this odd format and won’t show up at all.

But these “hearings” are not only a chance to send a message to the federal government. A large turnout of commenters will also remind Gov. Kate Brown and our state agencies that the state needs to stand with our communities and not with giant corporate special interests and their lobbyists.

Written comments can be mailed to Secretary Kimberly D. Bose, Federal Energy Regulatory Commission, 888 First St. NE, Room 1A, Washington, DC 20426. Reference the project docket numbers CP17-494-000 and CP17-495-00 with the submission. Comments can be submitted electronically via this quick online comment form.  If you want more information on how to comment, please check out this link.

Thank you for continuing to show up. I hope to see you at the hearings!
Hannah
P.S.  It will take all of us to get the word out about the hearings and to help out on the day of the hearings. Can you volunteer for an hour or two in the next two weeks? 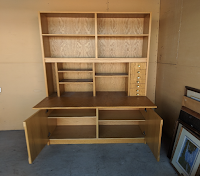 AUCTION SALE ITEMS
Some of the items donated to the auction either did not see or were not practical to bring to the auction.  Two of the items are listed here and we will take bids on them until the regular June meeting.  There are no minimum bids and you do not need to be present at the June meeting to submit a bid.
ITEM 1 – This is a gift certificate from Central Point Eyecare for an eye exam plus 1 pair of glasses or polarized sunglasses.  Retail value is about $ 1000 and the certificate must be used by 4/2020.
ITEM 2 – This is a desk suitable for use as a fly-tying desk.

It is in excellent condition and available for inspection at the club storage unit.  Dimensions are 39 ½” wide x 76” tall x 31 ½” deep.
Submit bids to Tim Bolling at timbolling328@gmail.com

Posted by cranefly at 8:26 PM No comments:

Please make your dinner reservation for the June 19th meeting.

Please email your RSVP to icrsrd303@gmail.com (give your name and how many for dinner)
For those who cannot do email: call (661)742-5835 in the afternoons only.
Pay when you arrive-cash or checks only.

Posted by cranefly at 8:37 AM No comments: