The February meeting of the Southern Oregon Fly Tyers will feature the liquidation of fly tying materials and accessories from Paul Cook who passed away a few months ago. It was his wish that the proceeds of this sale be split between the SOFT club and a college fund for Chris Barnum, two great causes.

NO PRE-SALES OR LAYAWAYS BEFORE 6pm.
THE ITEMS CAN BE PREVIEWED AT 5pm.

This is a large collection of great usable material so bring lots of cash and your checkbook. Don’t miss it!
Posted by caddiscase at 5:07 AM No comments:

Good Turnout for the DEQ Meeting

Here are some photos of the crowd just before the meeting commenced.  The format was for the public to ask questions about the role of the Army Corps of Engineers and the Oregon Department of Environmental Quality.  Thankfully many concerned citizens were on hand to show their deeply held concerns about the pipeline project.  Rogue River Keeper really did a great job of getting out the crowd.  Get ready to write letters. 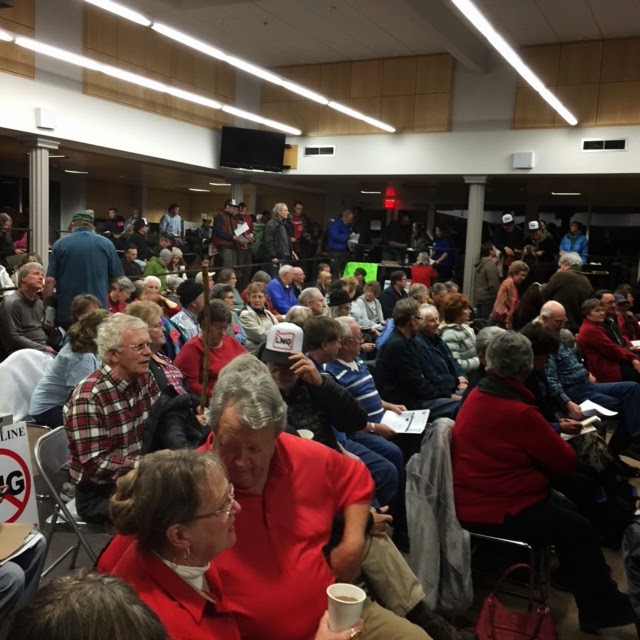 This crowd was so large that more chairs were brought in and then more and then even more.  Many were standing. 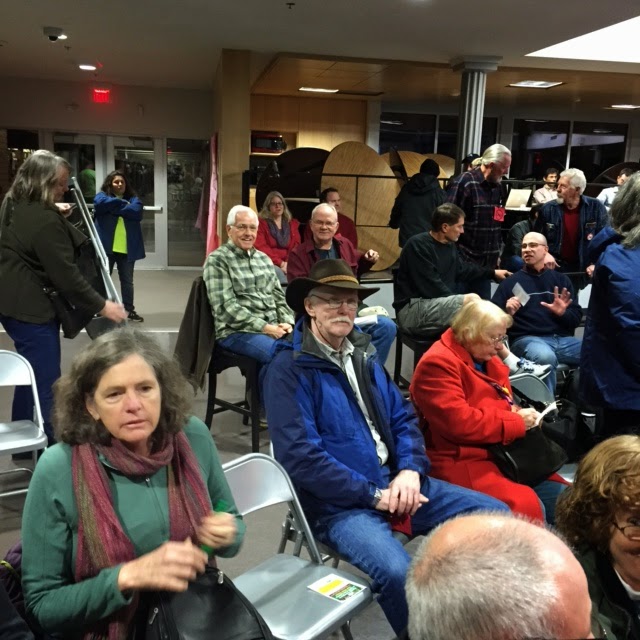 Notice the RFF members on hand to lend support. 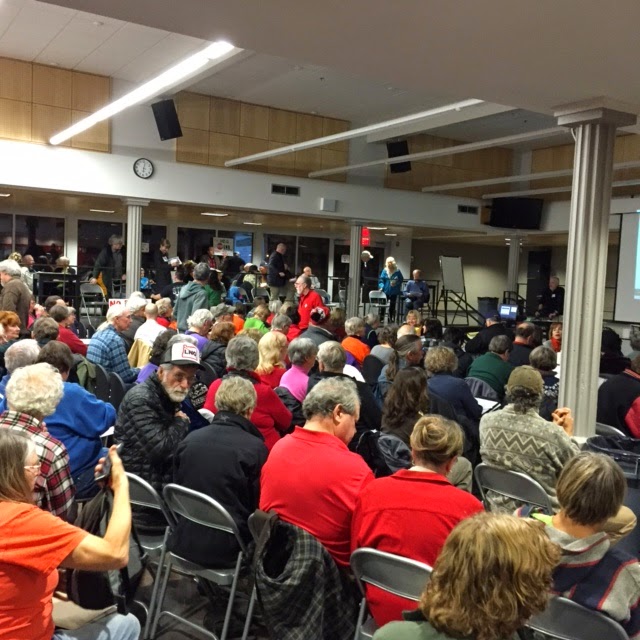 More RFF members.  If you weren't there, you should have been.  There was great energy in this crowd.
Posted by caddiscase at 7:41 AM No comments:

A biologist and environmental inspector who worked at the site of the massive liquefied natural gas terminal proposed for Coos Bay told federal regulators this week that project engineers were ignoring and possibly hiding contaminated soil issues at the site.  To continue reading click here www.oregonlive.com/business/index.ssf/2014/12/whistleblower_at_jordan_cove_l.html#incart_river.
Posted by caddiscase at 9:04 AM No comments:

Umpqua Valley Fly Fishers Is offering a ½ day workshop with

The Program will be:
Dylan Rose
Eastern Mexico's Yucatan Peninsula fishing Baby Tarpon
Dylan began his fly fishing career in 1997 working for a fly shop in Seattle. Since that time he has worked extensively as a guide, retailer, instructor, e-commerce specialist, blogger and sales representative for lines including Winston, Patagonia, Ross, Scientific Anglers and Idylwilde. Dylan's passion for the sport has taken him to destinations throughout Belize, Mexico, Christmas Island, Venezuela, Bahamas, Alaska, British Columbia, Hawaii, Puerto Rico and all throughout the American west. His drive and dedication to the sport revolves around a deep seated love for the outdoors and a desire to help protect wild places and the fish that inhabit them. Dylan is also a Federation of Fly Fishers Certified Casting Instructor, a gifted fly tier and an accomplished photographer. Dylan has travelled extensively through Eastern Mexico's Yucatan Peninsula fishing Baby Tarpon. His presentation will focus on these fisheries and travelling through this area. Dylan books many of these destinations for Fly Water Travel

Vegetarian Meals are available and will feature a main Entrée, Vegetables, Salad and Sides. If you would like a Vegetarian Meal or a Gluten Free Meal, please let Kellie know at kclmbr@msn.com or 541-776-4094
by Monday the 19th if possible.
Posted by caddiscase at 5:52 AM No comments:

Thank You from Casting for Recovery

Dear RFF Members,
We would like to take this opportunity to thank you for your continued support of Southern Oregon Casting for Recovery!  We couldn't provide this program without your help.  Some of you have been river helpers, some of you have experienced it first hand as retreat participants, some have tied flies, some have donated time and money to help our program continue to be the success that it's been for the past 11 years. Thank you for your generous donation in December.  If you would like more information about our program please go to www.castingforrecovery.org.
Sincerely,       Kim DeVries and Carol LaBranche
Posted by caddiscase at 7:33 AM No comments:

This is a copy and paste from a Rogue Riverkeeper message.  They are doing an awesome job in taking the lead in the LNG issue.  Lets give them our support.  Be at the meeting and speak up!

Gas companies have been working for years on a massive fossil fuel infrastructure plan called Jordan Cove to export fracked gas from Canada and the Rockies through southern Oregon and onto ships bound for Asia from Coos Bay. This plan would involve construction of a new 230-mile Pacific Connector 36" pipeline and permanent 95-foot wide clearcut through southwest Oregon’s forests, farms and salmon filled rivers.
Rogue Riverkeeper is having some real success in the campaign to stop the pipeline. The photo to the right shows many of the over 300 people who packed the Federal Energy Regulatory Commission's public hearing in Medford on December 11 and spoke against the project. Thank you to everyone who came to the hearing, now we let's do it again!

The Oregon Department of Environmental Quality is currently asking for public comments on permits regarding impacts of this proposed fracked gas export terminal and pipeline across the salmon watersheds of southwest Oregon. If these permits are denied the Jordan Cove project is dead in the water.
If you live in southern Oregon, please join us for an important public meeting with the Oregon Department of Environmental Quality to oppose a permit needed for the pipeline to move forward. This is a great opportunity to ask the Department of Environmental Quality hard questions about what impacts a massive pipeline crossing 400 waterbodies would have on water quality, drinking water, fish and other important values our rivers provide. Click here for a document with background and talking points to help you prepare for the meeting!

Public Pipeline Meeting with Oregon Department of Environmental Quality
Thursday, January 22 at 6pm to 9 pm (we will be holding a rally out front at 5pm, join us!)
North Medford High School Commons at 1900 North Keene Way Drive, Medford, OR 97504

Questions? Want to volunteer? Call or email Sarah for more information 541-488-9831 or sarah@rogueriverkeeper.org.

Can't make it to a meeting in Medford? You can still let the the Army Corps of Engineers and Oregon Department of Environmental Quality know you value clean water more than dirty energy and to deny these permits!
Both agencies are asking for comments on Clean Water Act permits deal with the proposed 230-mile pipeline to transport fracked gas from Malin to Coos Bay, through the watersheds of the Klamath, Rogue, Umpqua, Coquille and Coos Rivers. The project would involve a 36” pipeline crossing 400 different waterways, clearing important streamside forests and dumping sediments into clear water streams. Additionally the terminal site would require extensive new dredging in the sensitive estuary of Coos Bay. All told this would result in 5.8 million cubic yards of fill dumped into salmon strongholds throughout southwest Oregon.
TAKE ACTION: Send a letter to DEQ and the Corps below describing how you consider the project not in the best interests of the public, and your concerns that the project would harm water quality and salmon habitat. Your voice matters and now is the time!
Posted by caddiscase at 1:46 PM No comments: