Rogue on the Fly 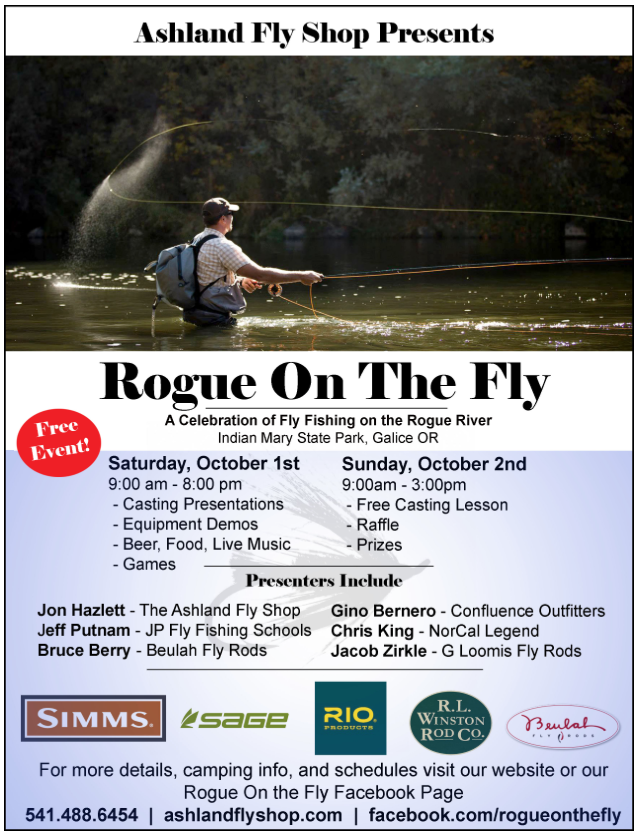 Posted by caddiscase at 10:31 AM No comments:

SPECIAL MEAL RQUESTS: Those who prefer vegetarian, vegan or gluten free, will need to notify Theresa by Tuesday afternoon (the day before) with your request by either phone (541)702-2153 or email tms1910@icloud.com.

The program will be:

Keith Lyon owns and operates a local business called Jefferson Rod Company. He also works with Jefferson Flywater, a guide service that operates on the Klamath River. Having grown up in the Rogue Valley, Keith loves the rivers and the fish in the area and is passionate about designing and building quality local fly rods.
Posted by caddiscase at 5:45 AM No comments:

The September newsletter is available on the website. www.rogueflyfishers.org
Posted by caddiscase at 7:02 AM No comments:

Robyn Janssen and the Rogue Riverkeeper staff have keeping a close eye on the proposed LNG project.  Now they need us to show up at this important meeting.  This is their message without the photos.

The Department of Environmental Quality (DEQ) and the Oregon Health Authority are hosting a regional air quality hearing that is important to our ongoing fight to stop the Pacific Connector Pipeline and the Jordan Cove LNG project.

In order to send fracked gas through the pipeline from Malin to Coos Bay, a 31-acre compressor station would be needed to compress the gas close to Klamath Falls. The compressor station would emit toxic pollutants known to cause cancer, like formaldehyde and toluene, and would become one of the 15 largest sources of climate pollution in the state. Last April we sent out talking points regarding the compressor station that you can read here for some background info.
DEQ is responsible for issuing a vital air quality permit for the compressor station.
Due to an air quality health crisis earlier this year in Northern Oregon, DEQ is in the process of urgently reforming their industrial air toxics regulations to align with standards of public health.
Will you make sure that our rural communities aren’t left out of this rulemaking by attending the hearing and asking DEQ to:

On another note, we are watching in inspiration as thousands of indigenous leaders and supporters come together to stop the Dakota Access Pipeline proposed for Standing Rock Sioux territory. Many were attacked with pepper spray and dogs over the weekend for peacefully defending their rivers, sacred sites, and community. This is unacceptable.
If you are interested in learning more and supporting the efforts of the Standing Rock Sioux and their fight against the Dakota Access Crude Oil Pipeline, there will be a rally in solidarity this Saturday on the plaza in Ashland from 12 - 2PM. Facebook event linked here.
Thank you for Standing Up for Southern Oregon by saying No LNG. No Pipeline!
Hannah and Robyn
Rogue Climate & Rogue Riverkeeper

Posted by caddiscase at 1:43 PM No comments: